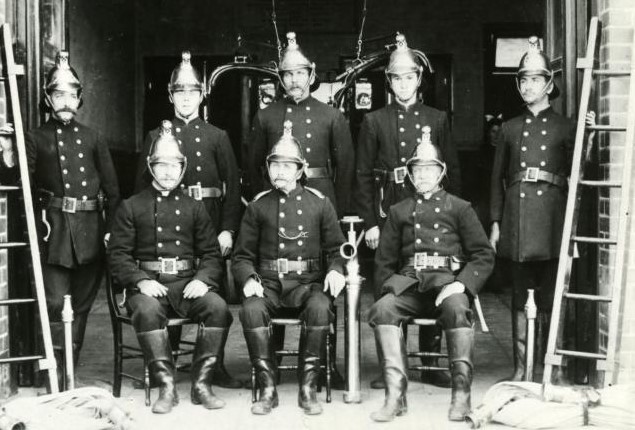 The precise date of the formation of a Fire Brigade in the Municipality of Rockdale cannot be established from the Board’s records but it is known that the St. George Volunteer Fire Company was located at Rockdale in April, 1891, for during that month of that year that Company applied to the Fire Brigades Board for telephone communication, but was refused, such permission however, being granted in February, 1894.

In March, 1895, the provisions of the Fire Brigades Act Of 1884 were applied to the Municipality of Rockdale by action taken by the Government of the day. The gazettal of this fact failed to meet with the approval of the Superintendent of the Metropolitan Fire Brigade as he drew particular attention to this fact in his annual report for the year 1895 by the inclusion in that report of the following words: –

“This (the inclusion of Rockdale) is notable as being the first inclusion within the Metropolitan district of Municipalities so distant from the City and it is a matter for anxious consideration how a fair amount of protection is to be extended to them (the citizens of Rockdale).”

In 1895 the Rockdale Volunteer Fire Company was situated in Rocky Point Road, now known as Princes Highway, and its complement comprised 16 men, 1 horse, 1 manual fire engine and 800′ of hose. The fire station and plant belonged to the Company and the Board subsidised it to the extent of £70 per annum, whilst the Council’s contribution to the Board in 1895 was £74: 5: 6.

During its first year in existence as a Brigade under the jurisdiction of the Fire Brigades Board the Company responded to 8 calls of fire of which 3 were false alarms, the actual fires being as shown hereunder :-

In April, 1896, the Volunteer Company wrote to the Board and asked it for assistance to build a new fire station. The Company had £75 in hand towards the structure and it had already paid £25 for the land. Tenders had been called and it was considered that the whole project could be completed for £150. Strangely enough there was no mention by the Company where it had purchased the new site nor did the Board of the day or the Superintendent visit the area to ascertain where it was situated but nevertheless the Board approved the granting of £75 from its funds to the Rockdale Volunteer Fire Company on the understanding that the Company vest the land and the station in the name of the Metropolitan Fire Brigades Board.

The Superintendent asked the Company to forward him a copy of the plans and specifications of the new project when it was found that tenders had been called for a structure without drainage, floors, doors or a stable. In these circumstances the Board refused to proceed further in the matter and the Company was informed accordingly.

The need for new premises, however, was fully realised by all concerned and in June, 1896, the Board visited Rockdale where a Mr. Cooke offered it 30′ of land in Rocky Point Road (now Princes Highway) with a depth of 200′ to a laneway at the rear at £7 a foot, The Board accepted this offer and a fire station together with quarters was erected thereon and occupied on the 1st June, 1897.

In 1904 the Board purchased the adjoining lot having a frontage of 31′ 11″ in order to overcome the difficulty of an encroachment.

The Rockdale Fire Station was officially opened on the 4th June, 1897 by the President of the Board, Mr. C. Bown, he being accompanied by Mr. T.M. Tinley and F.I. Jackson, both members of the Board and Superintendent Bear.

Whilst there is no record of the names of the original personnel of the Rockdale Volunteer Fire Company, it is known that Volunteer Fireman Russell was the first occupant of the new quarters of the fire station erected by the Board in 1897. He paid the Board a rental of 10/- per week for that privilege.

On the opening of this station the strength of horses was increased from 1 to 2 and name of one of them was “Warrior”.

In 1900 some of the Volunteer Firemen were Bandsmen and a Band known as the Rockdale Fire Brigade Band was formed. This Band is reported to have been one of the premier bands of the State winning the Highland Society’s Band Contest on the 2nd January, 1905, and the Forbes Band Contest on the 30th January, of that year. Over the years the Volunteer Firemen resigned from the Band which, however, continued to keep its identity and practice in the billiard room at the rear of the station. An unfortunate incident occurred in 1908 when it is alleged that this Band by “very forceful playing” broke up an important political meeting of the day and the Superintendent of the Metropolitan Fire Brigades issued a direction that the Band was no longer to be called the Rockdale Fire Brigade Band and they were refused permission to practice on the Board’s premises.